It’s getting more difficult to find spaces that welcome poets. One that worked well for a couple of months is making other plans for the monthly night of poetry that we started in December 2017. We’re grateful to Jude’s for the run, even if it was shorter than we had hoped for, but we expect a good night for 98118 resident T. Clear for Monday, April 2. 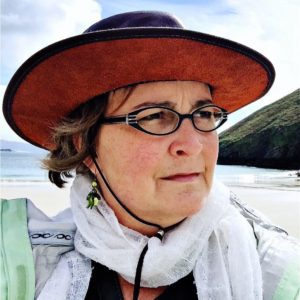 T. CLEAR, a Seattle native, is a founder of Floating Bridge Press. She has been writing and publishing for nearly forty years. Her work has appeared in many journals including Poetry Northwest, Cascadia Review, Fine Madness, Poetry Atlanta, Cirque Journal, Seattle Review , Crab Creek Review, The Moth, Terrain and numerous anthologies. She is inspired by the infinite possible variations in color and light that she is fortunate enough to explore daily in her day job working in sandblasted glass. And she would much rather muck out the chicken coop than write a bio.